Posted at 23:49h in Client News by Ashleigh Aungst
0 Likes 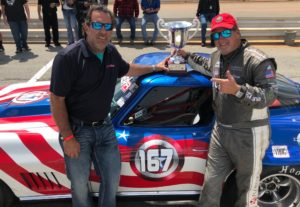 BRASELTON, Ga. (March 30, 2019) – NASCAR Truck Series Champion Mike Skinner won the Vintage Race of Champions (VROC) Charity Pro-Am race benefitting national military nonprofit Hope For The Warriors. With a field of 14 cars where professional drivers are paired with amateur racers, the event was the first of three VROC races being hosted by Sportscar Vintage Racing Association (SVRA) with each benefitting a different charitable cause. Skinner will also compete in the VROC Series final two events being run at Indianapolis Motor Speedway in August and Virginia International Raceway in September.

“What’s cool about the VROC Series is getting to race against legends in our sport,” said Skinner. “Al Unser Jr. has always been one of my heroes and we raced for the win today. From Davey Hamilton, to Wally Dallenbach, Willy T. Ribbs, Dorsey Schroeder and Geoff Brabham—the list goes on and on. There were so many people that are icons. It’s really cool to get in these old vintage cars—they’re lumpy, they don’t drive very good, so to get out there and wheel them around this historic course is something special. Today was a day that the fastest car didn’t win; the most consistent car won and it was really great to be a part of that.”