25 Oct Hope For The Warriors partners with Waltrip Brothers’ Charity Championship to restore self, family and hope for military families

Posted at 17:12h in Client News by Ashleigh Aungst
0 Likes

Hope For The Warriors partners with Waltrip Brothers’ Charity Championship to restore self, family and hope for military families

FRANKLIN, Tenn. (October 25, 2018) – Hope For The Warriors has once again joined forces with the Waltrip Brothers’ Charity Championship to shed light on the military community and share hope with service members, veterans and military families at the ninth annual charity event hosted by brothers Darrell and Michael Waltrip. Gifting a service dog to a decorated military veteran, providing relief to the military-centric community of Jacksonville, N.C., following a devastating hurricane, and supporting a combat veteran’s growing business venture are just three of the ways that the organizations joined forces to restore self, family and hope through this year’s event.

“The opportunity presented through the Waltrip Brothers’ Charity Championship has led to some inspiring collaboration between partners to support military families and veterans,” said Robin Kelleher, CEO of Hope For The Warriors. “From providing support to families trying to recover from Hurricane Florence, to granting Colonel Gregory Gadson with a service dog and supporting the growing business of Corporal Christian Brown — all three initiatives are so unique, and yet they each perfectly embody the mission of Hope For The Warriors. We cannot thank Darrell and Michael Waltrip, the NASCAR industry, as well as the communities of Nashville and Franklin, Tenn., enough for their support and helping us carry out our mission.” 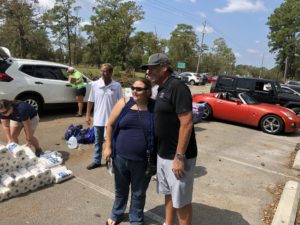 “What meant the world to me when I distributed that food was the smiles on people’s faces, along with the military guys who were there to help us give out the packages to the families in need,” said Michael Waltrip, co-host of the Waltrip Brothers’ Charity Championship, and who attended the hurricane relief distribution effort in Jacksonville, N.C. “To stand on the stage looking out at the crowd, knowing that the folks sitting at the tables and attending the Champion’s Dinner were the reason that Darrell and I were able to give those trailers of food and supplies away; it means a lot. We’re Americans. We love this country. We appreciate so much the freedoms that we have, and we don’t take them for granted. Any time we can help any cause or initiative with the military, like Hope For The Warriors, we’re standing out there with our hands up saying let us help.” 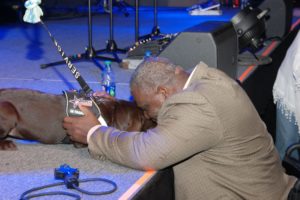 Gillie, an 18-week-old chocolate lab stole the show, as she embarks on a two-year journey to become a service dog for Colonel Gregory Gadson, USA (Ret). With $20,000 raised to fund her training, she will immediately begin her journey to become a service dog. COL Gadson served our nation for more than 26 years and has overcome great adversity while showing courage and grace. In May 2007, while serving as commander of the 2nd Battalion, 32nd Field Artillery, in Iraq, an IED attack cost COL Gadson both his legs above the knee and normal use of his right arm and hand. Despite this, he remained on active duty and became the Garrison Commander of Fort Belvoir where he oversaw the daily operations of the post, a strategic sustaining base where more than 50,000 military personnel and employees provide logistical, intelligence, medical and administrative support and command and control for a mix of more than 140 commands and agencies for the Department of Defense. Nearly one year ago, COL Gadson lost his service dog to old age. On Wednesday night, he met Gillie for the first time while at the Waltrip Brothers’ Champion’s Dinner. It was love at first sight.

“When we give a disabled veteran a dog, he just got his new best friend — that’s what I love,” said Darrell Waltrip, cohost of the Waltrip Brothers’ Charity Championship.  “We do a lot of stuff at our event; we do auctions, we have entertainment, but the highlight of the night for me is when we give one of those puppies. The bond is almost immediate. The dog put his paws up on Colonel Gadson’s shoulders as if to say, ‘hey, I’m your new best friend.’ To me, that makes the whole night worthwhile.” 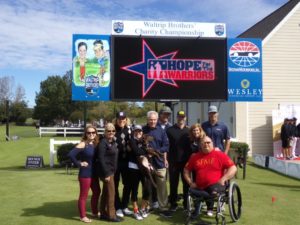 The event also highlighted what a sense of restored self, family and hope can look like for a combat wounded veteran by showcasing the work of Corporal Christin Brown and his business, Hero Calls. A veteran of the United States Marine Corps, Cpl Brown’s life changed on December 13, 2011 when he stepped on an IED during normal combat patrol on his second deployment to Afghanistan. Brown found himself in a drug-induced coma after sustaining multiple traumas to his hands and arms, amputations of his right leg below the hip joint and left leg above the knee, internal injuries and blast wounds to his upper left thigh. Working with the Gary Sinise Foundation and Hope For The Warriors, Brown has a custom smart home designed to his needs, as well as a fully-functioning workshop where he is able to run Hero Calls, making custom duck calls for hunters and also continue his lifelong passion of hunting.

2018 marks the second year of involvement for Hope For The Warriors at the Waltrip Brothers’ Charity Championship. Last year, the group auctioned off a block of 200 backpacks filled with nonperishable food items and school supplies for families at Fort Campbell, as well as granting A Warriors Wish®and sending the family of Army Sergeant Jesse Jackson to Disneyland for an unforgettable family vacation.

To learn more about Hope For The Warriors or find out how you can get involved, visit HopeForTheWarriors.org.